Hey guys! Sorry I haven’t posted in a while, but I’m getting back in the grove. That being said, from now on I am going to be posting normal articles on Sparkle Saturdays and Wednesdays and then I am going to be starting a new page on my site sometime this week called ‘thought of the day’. Because of school work, I am not able to write as many full articles, but I will do my best to post a ‘thought of the day’ at least twice a week where I will journal a quick response to one of your questions for me or write a quick reflection on something I thought of on that given day. As always, don’t forget to follow my social medias to get all the news that sparkles and don’t forget to sparkle! Now, onto today’s post!

In late July, I received a package filled with a very generous donation of a full pack of Matcha tea single sips and a sample packet from The Republic of Tea  for a review. 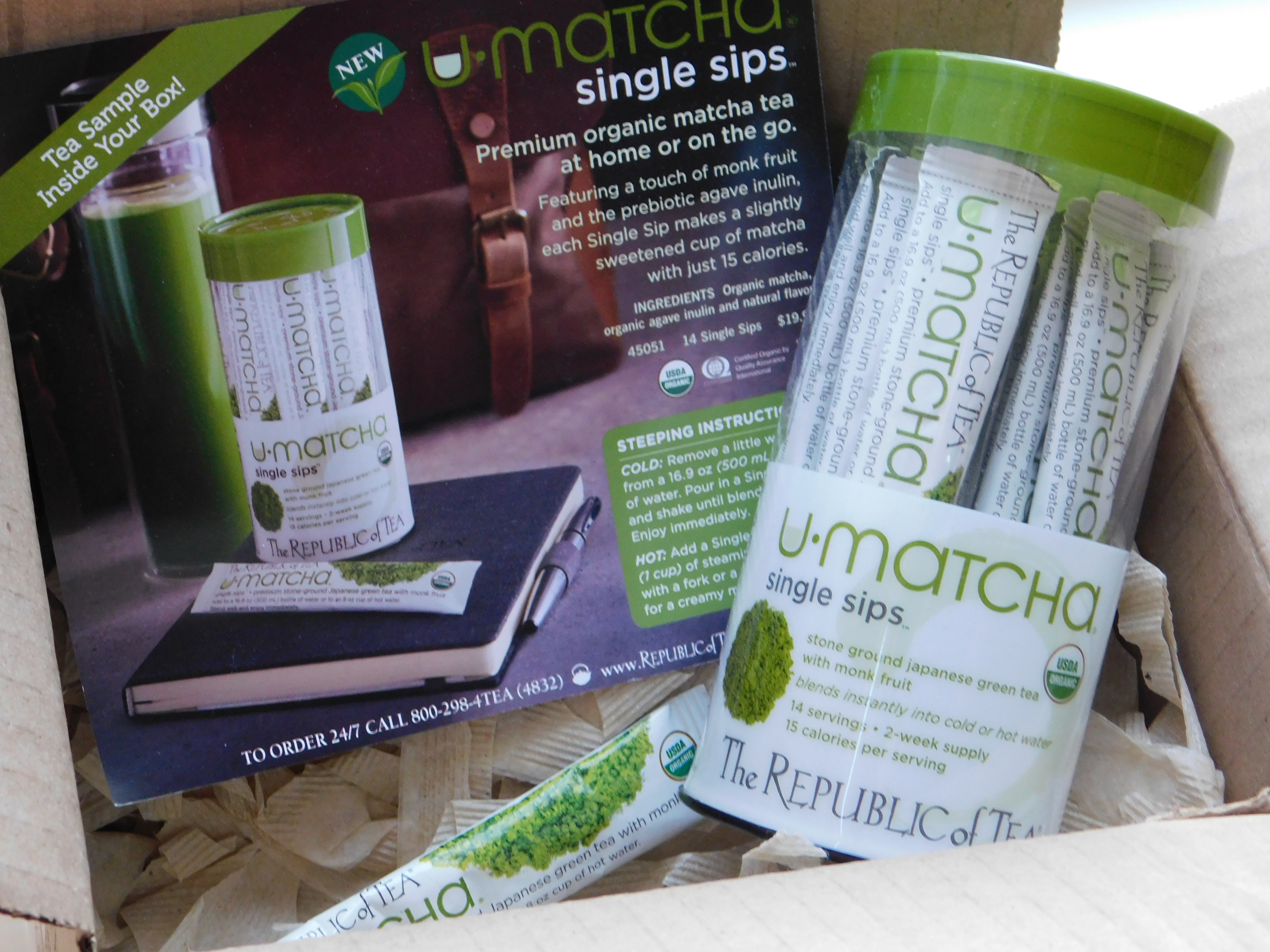 So, I decided to try out one of the sample packets today. The first thing that I noticed was that the tea packets had instructions for a few different ways to prepare the tea: hot, cold, or as a hot matcha latte. Being me, I decided to make the matcha latte. It was very easy to prepare, all I had to do was make a cup of hot water and stir in the tea packet with a fork and then add milk. Also, the tea was a very pretty green color when prepared.

As for the taste, the Matcha tea tasted slightly like green tea only with a slightly more subtle taste. The milk also made it very creamy and nice. I would definitely recommend Matcha tea, especially The Republic of Tea’s Matcha tea, for people who drink green tea regularly or for those who like tea lattes. In addition to its taste, I read up on Matcha tea and found out that it has quite a few benefits as well. Not only is Matcha tea good for detox, but it also burns calories and boosts energy. Overall, I was really pleased with my first cup of Matcha tea. As for you guys, the full pack of Matcha single sips will be included in the much awaited giveaway that I will be doing soon.

Hey guys! I’m back after a week of inactivity. I have been really busy with summer reading and homework but I’m really sorry. That being said, from now on I am writing my posts ahead of time and scheduling their posting, so you can bet on the fact that there will be a new post every Tuesday and Friday for sure! So, you should definitely subscribe using the form on the side bar. For other news, I am happy to announce that I am going to be holding a giveaway here on Sparklenews.com! More information will be coming up in future articles and on my social medias so make sure to follow those and check back weekly for updates. Also, I would like to thank you all for the recent incline in views I’ve been having, I really appreciate it. Finally, don’t forget to read road trip blogs day one and two if you haven’t already! And, without further adieu, here it is: Road Trip Blog Day Three.

On the morning of day three, we packed up and then headed out to a Target near the hotel where I ended up buying my new camera! I set up my camera in the car on the way to seven falls at the edge of Colorado Springs. Seven falls is this really cool nature place where you hike up about a mile to see the falls. Overall it was a pretty hike: there were wild flowers on both sides of the path, a small stream to the right with birds playing in it, and steep mountains of rock sloping up on either side. Sadly, although I had brought my camera with me, it ended up that it could only hold three photos without an SD card, so I needed to use my phone camera. When we got to the top of the trail there was a large rock with the falls. It was pretty, but to be honest the falls weren’t as large as I had expected. Despite this, it wasn’t disappointing considering how nice the walk had been. We took the elevator to the top of a lookout point where you could see the falls beautifully. We had actually gotten lucky with our timing because the lookout point had been closed all morning because there was a couple getting married on it and the ceremony had just ended by the time we got to the end of the trail.

Seven falls ended up taking a lot longer than we had expected, so we left for Saratoga a bit late but it was definitely worth it. So, after seven falls we went back to Target to get my camera an SD card and then headed towards Saratoga. The drive from Colorado to Wyoming was gorgeous although once we got on top of the mountains in Wyoming it was fairly flat. We did get to see more of the Pronghorn Antelopes like the ones we had seen in New Mexico though which was cool. Also, in Wyoming we came across this really pretty town with a population of 270 called Centennial and I had to stop for pictures.

I really love these pictures just because they look so unrealistic. The town was such a speck compared to the barren plains on top of the mountains in Wyoming and it looked so pretty against the mountainous backdrop. By the time we had gotten to Centennial we were only a few hours from Saratoga. From there it felt a lot longer though because we had reached Medicine Bow National Forest which is huge. To make matters worse, as it got dark it began to rain really hard and the roads curved a lot. After awhile the rain stopped and we made it to Saratoga. Saratoga has a population of 1,600 and is this really cool old town. The hotel we stayed in was built back in the 1800s  and called the Hotel Wolf.

That night we ate at the Hotel Wolf Restaurant which made really good real steak hamburgers. Also, I must add that the hotel was really cool. The room was decorated very nicely and to match the old fashion utilities and atmosphere of the hotel. Despite it being old, the hotel was also very clean and well kept. The only downside was that there was no AC, but we were able to open the windows to get cool air. Overall, day three was very fun.

While you’re here, here are a few of my recent articles you should check out: