Hey guys! This is just a short story that I wrote a little while ago and decided to share with you all. I really enjoy writing, as you can probably tell, and of the different fiction genres I especially enjoy writing sci-fi and dystopias. This specific story is a dystopia and science fiction that takes place hundreds of years in the future after the end of a powerful epidemic and once the man made creatures that once terrorized the people have vanished. If you have any feedback or comments feel free to leave a comment down below, email me at newsthatsparkles@gmail.com, or share it with me using #newsthatsparkles on Instagram or Twitter. Thanks and enjoy!

1.    the action of remembering something.

“a flash of understanding or remembrance passed between them”

The soft rain pelted the face of a young man as he trudged along a back street lined with boarded up houses and buildings. The man wore a dressy black coat that only the richest of men could afford and a matching pair of dress pants. The coat would likely be wrecked from the rain, but the expression of lost hope on the man’s face and the scar across his right cheek signified that he had seen worse times and was not the materialistic type. He had jet black hair that stuck to his face from the rain and dark eyes the color of coal that seemed illuminated in the blackness of night.

He continued on through the dark until he reached a main street empty of people and stopped. Had the man known this street once? Had he walked its metallic sidewalks before the factories shut down and before it ran rampant with crime? One could only guess, for his face was quite expressionless indeed. At this point a hint of something flared in his dark eyes. He looked up and saw the old factories, standing tall with their broken windows and equally broken spirit, rise up in front of him. He reached into his pant pocket and pulled out what seemed to be an old photograph.

Photographs were a rarity. Once, long ago, there had been a time where they had been abundant. Then, there was the time of the darkness and of the monsters and disease. People had no reason to keep photographs, and even if they did, they rarely did. Some were destroyed in fires and others lost when their owners left this life and went to the next without them. By the time the monsters disappeared, there were few pictures left, and few that cared whether or not there were any. Why would one care for silly photographs when there were more serious issues? Crime, death by sickness, and the rapidly declining population were far bigger problems. Plus, pictures had been made available digitally ages ago.

The photograph in the dark-haired man’s hands was frail to the touch and browning in color. The picture featured a garden of red roses in front of a grand white house. Had a stranger seen the photograph, they would assume that the owners of the bright home had nourished the flowers, allowing them to grow beautifully. That being said, it is a well-known fact that on-lookers are naïve. The man knew the truth of the flowers; how they had bloomed overnight and how they were not welcome. Unfortunately for the owners of the home, who were fairly naïve themselves, they were too late to realize the terrors that the flowers stood for.

The expressionless mask of the man began to break apart now that his eyes were fixed on the picture. There was a hint of sadness that showed through the cracked mask, but it only showed for a moment. Within seconds, the mask was already repaired and the man folded the picture and neatly returned it to his pocket. He then made a turn and continued through the dusty streets of the city he might have once known.

After a few minutes the man seemed to have reached his destination, for he stopped in front of a dilapidated old building. Upon further inspection, one might have recognized it as the house from the photo, but it barely resembled the bright home anymore. Opposed to what it had been, the house was now burned black at the edges from a fire that occurred years ago and parts of the walls were broken, the roof caved in, and the windows broken from countless crimes. Despite this, the man knew this house well as if it were an old friend.

Suddenly, the man felt a tap at his shoulder. He quickly spun around, alarmed, grasping at something hidden in his coat pocket. “I’m sorry, I didn’t mean to frighten you,” spoke the fragile voice of a feeble, old woman who now stood in front of him, her back hunched and her hair gray like the times she had lived through.

“What do you want?” Asked the man harshly, although how could one blame him for being cautious after everything he had been through?

The woman seemed to ignore his question and instead pointed behind him at the house he had come all this way just to see. “It’s a shame how things have changed, can you believe this used to be a beautiful house?”

The man turned to look at the house with her and then responded, “Yes, although it is sad that I can see the beauty that has passed from things. If I could only see what it is now, I might be happier, for I would not know the beauty of the past in comparison to the present.”

“You are wise beyond your years, boy. How old are you?”

“There was a boy that lived here a long while ago before the reign of the monsters,” responded the old woman, carefully studying the man’s face. “He would have been about your age by now, although I am old and could have that wrong. Did you know that he lived here with his mother and father? Nice folks, they were. His mother was a florist and I stopped by her shop every week to buy more flowers.” The man just nodded without answering. “Once I think about it, the boy never did come back after his parents were killed. I suppose after he left he was killed too.” Her eyes filled with tears at the thought of a young child being murdered.

“The boy, the one that lived here, he didn’t die.”

“How would you know, I’ve never seen you around here before.”

The man knew that the woman was mistaken, she had seen him many times before, but he didn’t try to argue. He knew that she remembered too, but he had changed so much. “I’m sorry, I need to leave now, my children and wife are waiting at home.” He gave a pleasant smile and patted the old woman on the back.

Although the smile was fake, it seemed to spark a memory in the old woman’s mind. “Kameil?” she asked.

“I’m afraid I don’t know who that is. Have a good night.” And with that the man was off, alone, into the night. He walked with intent even though the truth was nobody was waiting for him; he had no wife and no children. He would go home to his big house and eat alone in his big dining room and go to sleep in his big bedroom. Despite this, he smiled a sad smile. It was better this way, he thought, for the last time he loved, the recipients ended up dead. Dead over a patch of blood-red roses. 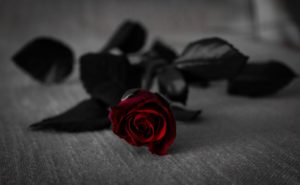